Outside, there is an apple orchard on a cracked hillock of sunburnt clay. The trees are loosely arranged, bent sideways from the salty winds that blow across the peninsula each afternoon. The fruit on these trees is small, and is distributed sparsely amidst the splintered branches. There is nothing on the ground, nothing rotting in the trees. A perfect binary of food/no food in the white light and mid-afternoon heat.

At the base of the hill a man in tattered black shorts leans, as if against a wall, on a cow that is tethered to one of these trees. He mends something, maybe a net, with precise movements of his hands. The cow stares disinterestedly at the dirt. Our bus lurches into a deceptively large pothole and loses traction in the front wheels. The engine groans. The driver swears. The passengers ride the wave of sideways motion, hands clasped to the steel bars of the seats in front.

Still swearing, the driver mops his brow with the back of a hand. There is a sign above his head that reads, “For your safety this vehicle is under continuous video surveillance,” next to the arrangement of screw holes where a camera would have been mounted, in some former life, before the bus was stripped and began the long trip southward. For our safety, there is no camera, just a worn machete hanging loosely behind the driver’s seat.

He slams the gear stick forward and down. The elephant skin creak of tyres against gravel. We are in motion. As we scrape out of the pothole, the front wheel ejects a fist-sized rock with a pop and a whip-crack. The man mending the net looks up, as disinterestedly as the cow, and then returns to his work. Neither of them stand in shade. Both cast long, straight-edged shadows that stretch up the hill, textured by the cracking clay.

Inside, the packed rows of seats are filled with school children in starched white uniforms. They sit as Tetris pieces, stacked three to a seat. Their voices echo off the walls and windows of this wheeled sardine tin that is so covered with stickers of benediction and exhortations of belief it almost feels held together by faith. Todo lo puedo en Christo.

The boys and the girls are neatly separated, girls on the left, boys on the right, not by rule but by self-selection. They throw quips back and forth across the aisle, past the old men in worn ten gallon hats, over the heads of abuelitas clutching shopping bags of onions, and past me, legs jammed into the insufficient space between the seats. We jerk suddenly to the right, and pull to a stop on the side of the road to exchange passengers. A clutch of new students pull themselves aboard.

As they slide sideways down the aisle they are greeted with a shout here, a whistle there, and the Tetris board is cleared and reset. New data demands new configurations, and these are sought amongst the unstated pressures of gender and social status universal to every school that exists on this blue and brown planet. Clowns to the left of me, Jokers to the right. And here I am. Sweating, and stuck in the middle. No you.

The soundtrack is an uneasy mix of thumping Latin dance, excerpts from an album speculatively titled “Arrangements for Air Horn” and Western classics, the fodder of soft-rock stations the world over. But there are interesting diversions. The aforementioned Stealers Wheels, for example, and their paen on centrality that is now intrinsically linked to imagery of suits, pencil-thin ties, and gruesome torture (for which, thanks, Tarantino).

So, when, after a longer than I would have thought necessary triple blast of air horn, the opening chords of a Tracy Chapman song sound, I am less surprised than I would have been ten minutes previously. Or the ten minutes previous to that. Each minute spent on this rattling silver-green contraption of starched fabric and stickered belief shifts the line of expectation lower into the humid and sweaty fuzz reserved for the tropics.

This song was on the compilation tape my parents brought on road trips. We listened to these songs so many times the hand-written track titles on the tape had been smudged into illegibility. Like many of those memories of childhood containing repetition (dinosaur name cards, what does that very hungry caterpillar eat next?) the correct order of things is burnt into my subconscious. Each time I hear a song contained on the tape, I still half expect the next to follow, and experience a tiny pang of regret when it doesn’t.

This song is entitled, “Baby, Can I Hold You” and it came after Joan Armatrading’s Drop the Pilot, but before Paul Simon’s Graceland. Ostensibly, it is about making mistakes. Practically, it feels as out of place here as I do.

Do you remember the rapid repetitive clicking sound that car tape decks made as they reversed direction? The slight change in pitch as the tape’s slack was taken up and the second side began to play. The difficulty in working out which of the fast forward or rewind buttons would work in this direction at this time? These tactile memories are useless now, confined to the same memory hole as the sound floppy disks make as you spun them idly on the end of a pencil, centrifugal force applied to the neat black circle of magnetic tape.

But there are other memories that still hold relevance to this rapidly changing world. The pot stacked with molinillos that sits by the window of my parents’ kitchen as they quietly gather dust. This morning, when I ordered a hot chocolate, the women in the market whipped out one similar and used it to whisk the liquid to a frothy head. The smells of childhood issue from that pot on the flames, and memories dance along the boundary of remembrance.

The blue jeep we drove through Costa Rica had a tape deck that made that clicking sound. A chu-chu-chu-chu-chucking of insectoid magnitude. It also had a ragged canvas back, and I held the steel cross bar tightly as we bumped through the jungle. My mother held me tight, and there is a picture of a tiny red man, leaping from a sea-side cliff, that moves across my father’s chest as he changes gears. Everything smelled of bananas, and dirt, and sweat, and the light is golden against the deep green of the canopy.

“Maybe if I told you the right words, at the right time.”

Outside, there is an apple orchard on a cracked hillock of sunburnt clay. Everywhere the bougainvilleas hang over the fences in heaped piles, purple and orange flowers in clumped disarray. The students practice the all on and the all off, their uniforms luminescent in the dimly lit bus. The front dash is covered in rectangular mirrors and as we rattle and jolt onward, they glitter like spiders eyes in the dark. Everything smells of bananas, and dirt, and sweat, but this time the light is white, and bright. I practice memory for some specific time in the future, when perhaps I will need these things again.

Let's go get a burrito and debate our favorite pasta shapes as the crenelated bank across the way catches the sun. the late sun, the one that holds hands with the older trees. We're not the kind to exclaim at beauty, so we don't do anything but notice, and noticing, 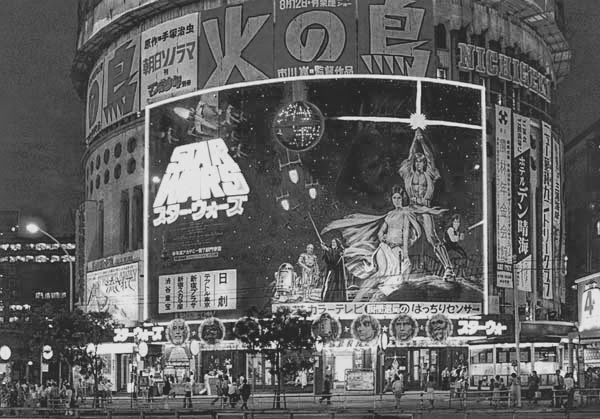 This has been a good week for those that love to talk about sci-fi. Yes, dear readers, we are indeed going there. Let’s talk Star Wars. The past couple of months have been a fascinating experiment in merchandising taken to its logical extreme. I posit that everything it is